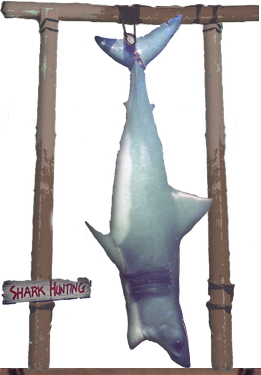 The JAWS section of the Universal Studios Tram Tour opened on April 10th 1976, a year after the release of Steven Spielberg's 1975 smash-hit film.
It's a Disneyland inspired animatronic attraction that featured very little of the shark (like in the movie) and a lot of the sets including the actual ORCA. Later visitors would be dropped off at the Visitor Entertainment Center where they could take a picture with an exact replica of Bruce the shark.

The photos above show the construction of the set and the mechanical shark for the JAWS part of the backlot tour. Before JAWS, the lake known as Singapore Lake used to show storm effects with a wave and smoke machine.

For more information on the history of Universal Studios Hollywood:

As the red and white striped Universal Glamor Tram rounds the bend out of 'Six Points' we come face to face with the 'Welcome to Amity' billboard. To the right of the tram quaint little fishing houses appear. 'Quints Bait and Tackle Shop' makes way for the Amity Motel which sits on the lake front. Sound effects of a foghorn and bell from a buoy can be heard throughout the area.
The tour guide points out the fact that George - the lone fisherman in the water - is very brave for fishing in an area where a killer shark has been spotted. Cue John Williams 'JAWS' theme as we now spot a dorsal fin slicing through the water. It submerges as George and his dinghy disappear in an explosion of foamy water and squirting blood. "He sure had a lot of guts...and there they are" remarks the guide with typically stilted delivery.

The tram has now boarded a pier. The guide then promises to catch the shark with bait - a yellow barrel. Soon the unseen shark pulls the barrel which unwinds a massive chain (like the JAWS pier scene!) This causes the pier to lean precariously close to the water about 20 degrees. Tour guests scream in delight as the pier breaks away causing a small explosion.
With the tram leaning in the shark then breaks the surface coming dangerously close to the tram as we zoom away through various 'JAWS' props including replicas of the red and white cabanas, the "Help Shark!" billboard and the actual ORCA. You have just survived the "JAWS Attack!" announces the tour guide to the giddy and giggly guests. Words by West. M.

JAWS Attack Shark Mark I is remembered as 'Carrot Tooth'. According to JAWS Production Designer Joe Alves 'Carrot Tooth' came out of a meeting in which the studio execs wanted a shark with long teeth 'like the poster'. It was more goofy than scary. Its giant teeth resembled icicles from the doomed avalanche attraction more than killer shark teeth.

The body of the attraction shark is actually struck from the Bruce sea-sled mold. Look closely and you will see that the bottom is missing. This same body is still in use today. The head is a caricatured resculpt of Bruce with less pronounced jowls. Bob Mattey was embarrassed by the jowls of the movie shark so these were toned down while an improved mouth was created which allowed for greater water scoopage. This cartoon head would only exist on the Mark I fish.

There were two colour schemes for this fish. The first version was green with a pale blue belly. The second was bluer on top with an off-white belly. The shark also leaped out of the water at a higher angle than subsequent sharks. Photo courtesy of Kurt Root.

When Steven Spielberg worked on the lot, he would frequently sneak aboard the ORCA and reminisce.

With the release of 'JAWS 2' in 1978, the attraction shark was changed to look like the new movie shark. This second shark lost it's carrot like teeth and gained even more fake looking teeth. The head was widened and the eyes were made completely black. Since 1980 there have been numerous repaints and various dentures put in to replace the silly version that first appeared. The photos below show the progression the shark has taken over the years.

From the huge success of the movie in 1975, Universal put on display a replica of Bruce the shark. The 25 feet long, 12.5 feet wide, and 8 feet high fiberglass shark wasn’t used in the movie, however it was cut from the mold of the original mechanical versions.

In 1991 the Universal Studios Hollywood display was the last remaining copy of Bruce the shark, but somehow he was given away with a bunch of cars to a junkyard owner in Sun Valley, California. According to the junkyard owner, the shark was sitting in the back lot ready for the dumpster or the sledgehammer when it was offered to him.

For decades Bruce soared high above the junkyard with only palm trees and birds for company. So when the junkyard closed doors in 2016 Bruce had to move on, but where? After considering auctioning off the shark to the highest bidder, the junkyard owner decided to donate Bruce to the Academy Museum of Motion Pictures (AMMP).

Bruce is currently under going restoration and will be shown off when the AMMP opens in 2017/2018.

Visit the GALLERY for more photos of bruce.

After the film wrapped, the studio sold off nearly everything from the film, as they had no faith it would turn a profit.
The boat was purchased by a special-effects technician, who restored the boat and later used it for sword fishing up and down the California coast. After the film was released and became a huge box-office success, the studio approached the former tech and purchased the boat back from him for use at the Universal Studios Tour. He was allowed to keep a few mementos of his ownership of the boat, the metal letters 'ORCA' (seen on the stern of the boat) and a life preserver.
On the 28th July 2006 these two mementos went under the hammer and sold for a whopping US$30,000.

This is the original Orca, the boat used during all the major scenes requiring a moving, floating boat. The Orca was on display in the amity lagoon for all to watch and admire as the tram pulled away from the JAWS attack. Erik Hollander was lucky enough to board the neglected vessel in 1987 and gave this report:

All of the electronics gear had been pulled out and the forward cabin was flooded. The pond wasn't that deep and when the wood rotted she sank in the shallow water, which flooded the lower cabin where the bunks/head was and the engine room. Apparently, Universal tried lifting her out with a harness and the hull was so rotted that she simply broke in half. So, they junked her.

The sharks location is indicated by the floating yellow barrels. The first barrel you see pulls away the dock. It was the second barrel that travelled past the ORCA giving away the position of the shark.

The second barrel would of been submerged when the first barrel could be seen dragging the dock. Both barrels moved through the water on a pulley system.

The second barrel was removed from the attraction in 1984 and I believe the reason for the removal was to make the shark's final appearance more of a surprise to visitors.

George the lonely fisherman fishes the waters of Amity everyday, also managing to get himself eaten everyday!

George noticeably changed his appearance at least four times, the original George was sporting shorts, cap and sunglasses in 1976. It was 9 years until George had a makeover wearing a yellow mac. He had a couple of minor costume changes until 1990 George turned into a what looked like a garden gnome. Finally in the mid 90's George put his yellow mac back on before retiring in 2000.

After 24 years in service George the fisherman was replaced by an Amity Police Diver in 2000 when the attraction received an upgrade to JAWS on fire.

Ben Gardner's Boat featured in the film JAWS, the scene which Richard Dreyfuss went under water to look for the missing fisherman, when suddenly Ben's head appeared in that hole!
Because of THAT hole the boat had to be supported by wooden frames unseen by park guests, unless of course you were lucky to see the lake drained of water. In 1981 the boat lost its original blue colour and was re-painted white.

For unknown reasons Ben Gardner's Boat was removed and dumped into a skip during a major rehab in May 2005, the photos below thanks to Dennis Dickens show the sad truth, the boat in a skip whilst the lake was drained.

So where is Ben Gardner's Boat now? Well I hope it wasn't truly trashed and instead was stored somewhere. Maybe someone saved it at the last minute and Ben Gardner's boat now lives a new life like Junkyard Bruce. I'm trying to find out if every last piece is gone for good or not. Remember this is an actual piece of movie history!

The attraction itself is featured in a number of TV shows from the 80's and 90's. The houses around the Lake feature as the fictional town of Cabot Cove in the TV show Murder She Wrote.

The idea was to upgrade JAWS into the 21st century, obviously Universal saw this part of the Studio Tour lacking special effects and so fire effects were brought back into the attraction.

So After a two week rehab including draining the lagoon and removing a few props, the 30th of May 2000 saw the day that 'The JAWS Attack' became 'JAWS on fire'. George the fisherman was removed and replaced by an Amity police diver. Also a few boats from JAWS 2 were dragged out of a shed and used as set dressing for the Cabot Cove/Amity Island facade. I don't know why it was selected for redressing. The attraction has been around since 1976 and has changed little since opening day. 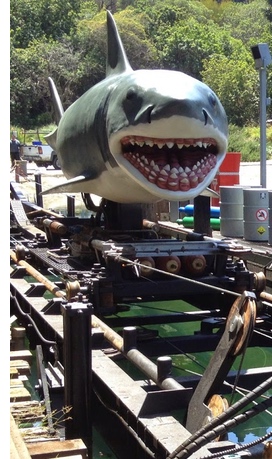 The shark in the attraction utilises a similar ride system first created by Bob Mattey, of all people, for the Jungle Cruise attraction in Disneyland. The shark prop basically moves back and forth in a straight line mounted on a platform.

The actual platform and shark sit in about ten feet of water surrounded by two walls - sort of like a box. At a certain point in the show it is triggered and it runs its course. Very complex for 1976, but simple by todays' standards.

The photo on the right shows the shark and its moving platform above the water during a rehab in 2012. The shark is then easily accessible to repair without having to drain the lake.

When you're riding The Studio Tour you might be lucky enough to spot one of the attraction sharks stored away on the backlots. Usually they're run down and in need of some major repairs. The photo below courtesy of Russ shows the attraction shark in November 2007 parked alongside some backlot cars including the Back To The Future Delorean. Goes to show that shark is huge! 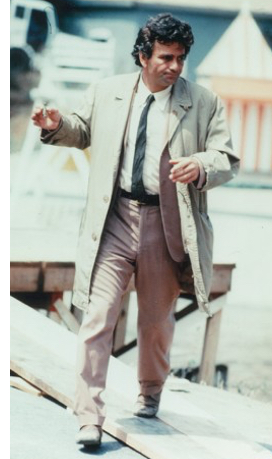 The JAWS lake has featured in a number of movies and TV shows since opening in 1976. Below is a chronological (incomplete) list of each appearance the attraction made on film and TV.